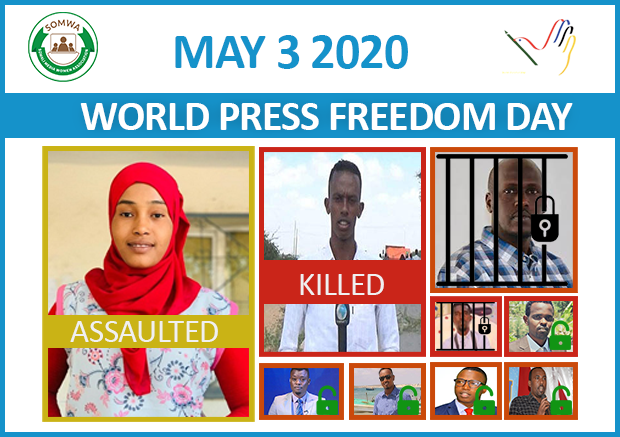 As we celebrate the important role journalists play around the world. We also take a hard look at the current state of press freedom and remember those who have died in the course of duty.

It is yet another moment for us all to reflect on, and take stock of, the evolution of the media landscape in Somalia and, and particularly as regards the sub-theme: Gender equality in all aspect of Media.
On this occasion of the World Press Freedom Day, May 3 2020, the Somalia Media Women Association (SOMWA) fraternity issues this press release as a continuing resolve to stand with (and acknowledge the role of) , not only the women in media in Somalia, but also journalists who have lost their lives, become maimed in duty, and indeed, the entire women-folk in the country!

Global rankings of Somalia in regard to journalists’ safety don’t paint a very rosy picture! Ranked at 163 out of 180 countries, the press freedom watchdog, Reporters Without Borders (RWB), has revealed “a journalist has been killed in Somalia every year since 2006!” Up to 50 journalists in Somalia have lost their lives in the last 10 years, with 3 getting killed in 2019 and 1 this year. The media landscape remains awash with risks related to, among others, intimidation, violence, corruption and gross human rights violations and including gender inequality. Frontline women in media in particular continue to put their lives on the line to ensure legitimacy, independence, voice and dignity of the press!

Sadly, women’s rights continue to be violated upon even when it comes to employment.  Male counterparts are always favored. Even when media houses, including the state media, recruit female journalists they (Media Sectors) select women journalists by their appearance and age which is against basic employment protocols, the federal constitution and Universal Declaration of Human Rights, which Somalia is a signatory.

For instance, on 11th of April 2020, the state TV (SNTV) advertised two vacancies for female journalists; yet we found the selection process was completely discriminatory and against Human Rights. SOMWA and other Media Organizations condemned the act but unfortunately neither the Minister of information nor anyone else from the state TV acknowledged the flaws and or regretted the iniquity! Veteran women journalists have indeed also pointed out to “gender stereotyping,” among other obstacles.

Incidents that undermine press freedom and related to women in media, continue to happen….with some going unreported! Somali Media Women Association (SOMWA) promotes Gender Equality, and sadly would like to underline that in Somalia only one fourth of the journalists are female. For that reason, SOMWA recognizes this field as a male-dominated industry! Women journalists in Somalia are denied their fair share of opportunities for prominent/managerial, “top-level” positions, for instance, Editorial and Directorship roles, big audience programs coverage and media ownership. They continue to face harassment, intimidation, assault, work-related exploitation, insecurity…among many other challenges.

Again, on 20th April 2020, an incident in Mogadishu saw Faduma Abdiqadir, a female journalist of local Shabelle Radio and a TV female journalist together with her two colleagues, harassed and assaulted by specially-trained soldiers (HARAMA-AD) from the Somali Federal government during curfew after they finished their night shift. In an interview conducted by SOMWA, Faduma said “We showed our IDs and told them that we are working and have the permission to work during the curfew, yet they did not listen and kept assaulting us”.

Talking about Gender Equality, equal payment remains a big issue in the industry. Women journalists do the same job as their male counterparts, if not double, yet they are paid less than their male colleagues. Somali Media Women Association cannot emphasize enough how important it is to break that bridge and have women equally empowered and able to access better and equitable opportunities! We must continue to advocate for improved media policies as there is currently lack of documented framework to safeguard proper and equitable employment in media.

Human Rights Watch (HRW) can help us to summarize the fate of women journalists in Somalia, especially as regards violations related to gender, and with some of the harassment and discrimination cases perpetrated by fellow male colleagues!  In their May 2016 Report, “Like Fish in Poisonous Waters” Attacks on Media Freedom in Somalia.

HRW rightly reveals “female journalists in Somalia face additional challenges. Along with the threats, intimidation, and violence faced by all journalists in Somalia, social and cultural restrictions impede female reporters and may result in them being targeted not only for coverage that angers powerful people or groups, but also simply for being women. These dangers contribute to the limited number of women journalists working in Somalia.”

SOMWA also remains committed to disseminating factual information especially during this period of COVID-19 pandemic “without fear or favor,” and particularly on matters that affect women and a large pool of other vulnerable persons who suddenly find themselves in unfamiliar territory!

In this instance, SOMWA remains true and committed to – and would like to echo – the remarks of the UN Secretary-General Antonio Guterres, namely, “As the [COVID-19] pandemic spreads, it has also given rise to a second pandemic of misinformation, from harmful health advice to wild conspiracy theories. The press provides the antidote: verified, scientific, fact-based news and analysis.”

This day, once again, behooves us to call on the government (indeed a strategic partner to Media industry!) to demonstrate and remain committed to press freedom in Somalia; still, it provides an opportunity for – and is a wake-up call to – all of us to continue to do more to particularly secure the rights, well-being and dignity of women in media, and indeed, all women in Somalia!

On this occasion of The World Press Freedom Day, SOMWA wishes to reiterate Somali people’s inalienable rights to basic, accurate and gender-sensitive information that will happen only if we protect, uphold and practice Gender equality in all aspect of Media!

Meanwhile, SOMWA would also like to remember, honor, recognize and empathize with the following dedicated media and gallant servants of the people (among many others!): –

I reiterate my wish and, “……call on my fellow male colleagues and federal government officials to respect – and indeed practice – gender equality, allow us to be part of the decision-making process and to hold managerial positions; I urge all colleagues to work for sustained positive change in the media space in Somalia in the coming years!”

Together we can make the change!